Contact with overhead power lines is extremely dangerous and it occurs far too often. Some are lucky and escape with injuries but when luck has run out, the consequences can be deadly. Energy Networks Association (ENA) represent the ‘wires and pipes’ transmission and distribution network operators for gas and electricity in the UK and Ireland. In the last two years, eight people were killed as a result of contact with an overhead power line. In a five year period, there were over 3,000 incidents involving Haulage and Transport vehicles and overhead power lines where serious injury or death was a possibility.

In response to the scale and severity of these incidents, Energy Networks Association and GB’s electricity network operators have joined forces for a second time to provide advice to drivers of haulage and construction vehicles in regards to safety around overhead power lines. We worked with ENA as part of their ‘Look Out Look Up’ safety campaign of which the key objectives were to raise awareness of the risks of overhead power lines, increase understanding of how to deal with them safely, motivate people to adopt safe behaviours around overhead power lines and encourage people to recognise 105 as the national number for power emergencies across the UK.

It was important to raise awareness of the risks and dangers of working close to overhead power lines and also to demonstrate the consequences of even the slightest touch of a live line. As the film was part of a wider campaign, it was hoped that it would dramatically reduce the number of fatal or near-fatal injuries. It was also expected to reduce the number of power outages that occur as a result of inadvertent line contacts.

As one of the main objectives, we had to educate workers – achieving impact by telling a story, creating tension in the hope it would shock viewers into thinking twice when around overhead power lines. A powerful and emotional script is delivered by a narrator explaining how it’s usually when things coincide that accidents happen. In the case of ‘Look Out Look Up’, it’s the construction worker being on his mobile phone not paying attention and the rising of the crane touching the overhead power line that coincide reinforcing that vital safety message of how it’s so important to always pay attention when in the vicinity of these power lines, especially when in control of large vehicles. 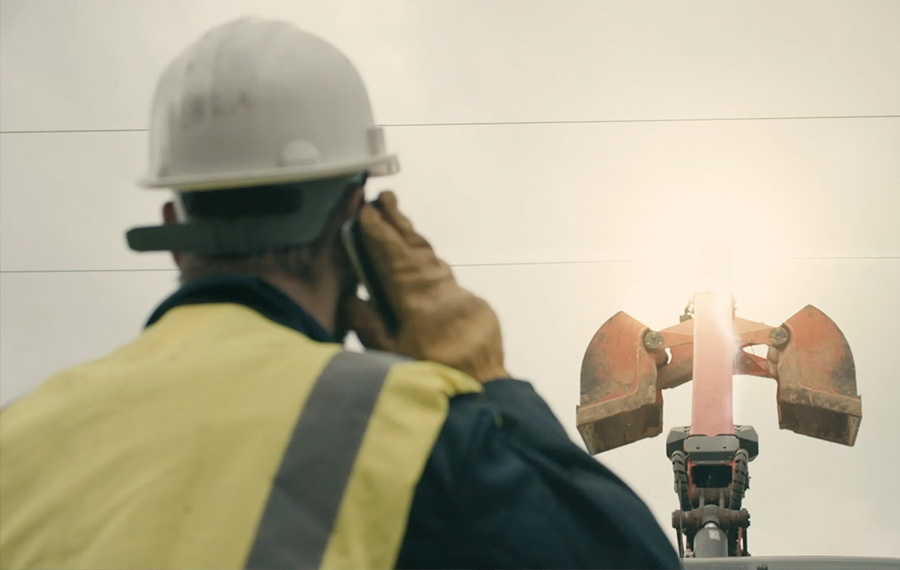 As Energy Networks Association are the electricity networks’ trade body, ‘Look Out Look Up’ was distributed across all nationwide electricity network areas across the UK. The film was seen online and in a series of events that the member companies run in their local regions. In addition to this, there is also a ‘Look Out Look Up’ safety document which is issued by ENA giving guidance on the use of mechanical vehicles in the vicinity of overhead power lines which this film compliments.

For the initial release of the film and the wider ‘Look Out Look Up’ campaign, Peter Vujanic, Head of Safety, Health & Environment at UK Power Networks took part in a series of radio interviews which were broadcast at various times throughout the day capturing a variety of different listeners. Channels including BBC Radio Scotland, Radio News Hub and UCB 1, to name a few, all broadcast the interview with a combined reach of over 1,500,000 listeners. Response’s from electricity workers was also extremely positive:

I just had to send you a personal email for this one. WOW that new overhead safety video is good, I am not a person who has tears in their eyes easily but I felt myself welling up. Well done to you and the team that put this together.

Watch the film below…