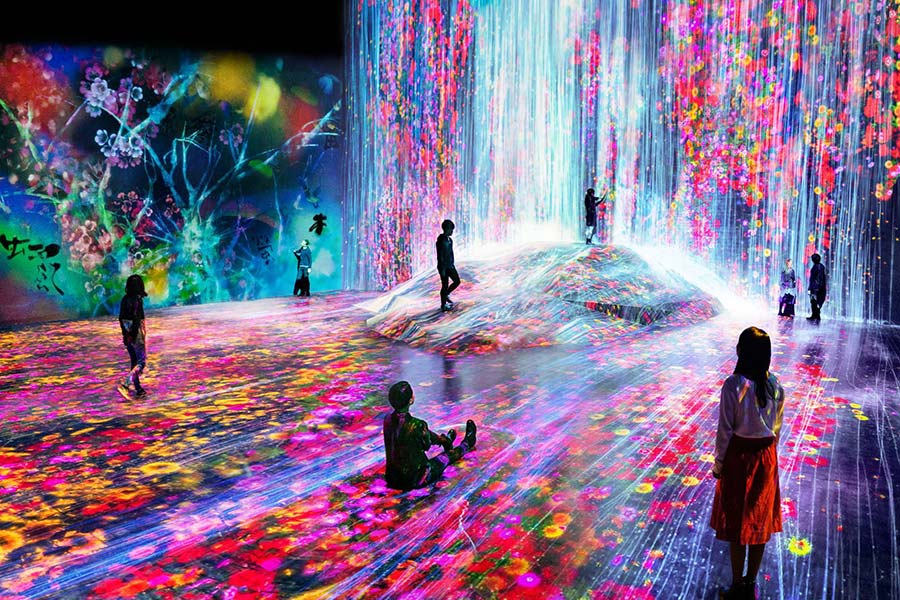 I’m a huge fan of immersive theatre, which has existed in many forms over the years but exploded to prominence after Punchdrunk’s Sleep No More, their 1930’s film noir adaptation of Shakespeare’s Macbeth, was launched in 2011. We’re lucky in the UK as Punchdrunk started here, along with other leading companies like dreamthinkspeak and Secret Cinema, along with brave venues like the Barbican and National Theatre.

In immersive theatre, the audience are not merely passive bystanders. They’re part of the story however small their role may be and in the middle of the action. You can see the same kind of breaking down of the traditional separation between the work and the audience happening in the art world as well, creating opportunities for galleries and museums leading in many interesting and creative directions.

We’ve collaborated with museums for many years, shedding light on the objects on display and connecting them to the outside world.

Immersion can change the relationship between the art object and the viewer in profound ways. It can be unsettling and thought-provoking as well as visually stimulating. We spend most of our time looking through a lens of some sort, so it’s fascinating when our everyday view of the world is pleasantly interrupted to offer ways to experience the unfamiliar or new ways to experience what we thought we already knew.

I love this kind of stuff, as seen in my Instagram post (and my socks) 18 months ago from a brilliant show at 180 The Strand which was full of hidden surprises as you wandered through 3 stories and the roof of a disused building. It’s a piece by Ryoji Ikeda called Test Pattern number 1. With something like this, it’s great to feel that you’re part of the artwork and that you’re changing it and it’s shaping itself around you in some way.

Here are some more spaces we’ve gathered, where immersion really is at the heart of the experience:

ReBlink is an exhibition at the Art Gallery of Ontario in conjunction with Impossible Things, a creative technology company. This blends traditional art with the latest in computer vision technologies to ‘re-mix’ classic paintings in the Art Gallery of Ontario’s permanent collection. This is undeniably clever (watch the reactions!) but is it just a gimmick? Isn’t it in danger of reinforcing the message that this is just old stuff that’s not relevant to a younger generation?

How can you change the way that people see something that’s so common it becomes invisible?

Swiss Pavilion invites you to explore every day rental homes as if you’re Alice in Wonderland. Called House Tour, the exhibition sees the Swiss Pavilion at the Venice Biennale transformed into a warren of unfurnished rooms, using the bland fittings commonly selected for new-build housing or rented apartments.

A 360-degree video was also produced allowing you to explore the space online – Does the 360 add anything?

There are fantastic opportunities for education and learning through cultural institutions.. Hortus is the first exhibition of its kind where people can engage with future farming and grow their own food on-site. Designed for FICO Eataly World, this is an interactive pavilion that allows everybody to become a food producer, thanks to a digitally-augmented hydroponic cultivation system.

Simple ideas delivered flawlessly can pack a real emotional punch. Ash 2 Ash is an interactive installation created by Polish collective panGenerator for National Ethnographic Museum in Warsaw. As a part of TEEN AGE exhibition, the concept of the installation visually comments on the selfie culture as well as making us think about Damien Hirst’s memorable title: the physical impossibility of death in the mind of someone living. Here viewers send their selfie to the specific URL to make it appear on the display, then each pixel of your selfie decays before your eyes.

Art can get you to reimagine your world and transport you to amazing places. I don’t know if this qualifies as truly immersive but these luminescent sculptures by Shih Chieh Huang are amazingly beautiful and the way they move takes you into a strange underwater world.

Anything can now be made into a screen. Video projection mapping has the capacity to transform any object, creating the illusion of art that moves and breathes around you. The Borderless exhibition is by Japanese art collective TeamLab at the MORI Building DIGITAL ART MUSEUM in Tokyo – an incredible multi-room installation on a breath-taking scale which reacts to the people inside it.

It looks like being inside a giant brain and I want to see it in the flesh!

There are so many opportunities to use imagination and technology to surprise and involve an audience and that can create interesting conversations, which help us see the world differently (as well as having fun along the way).