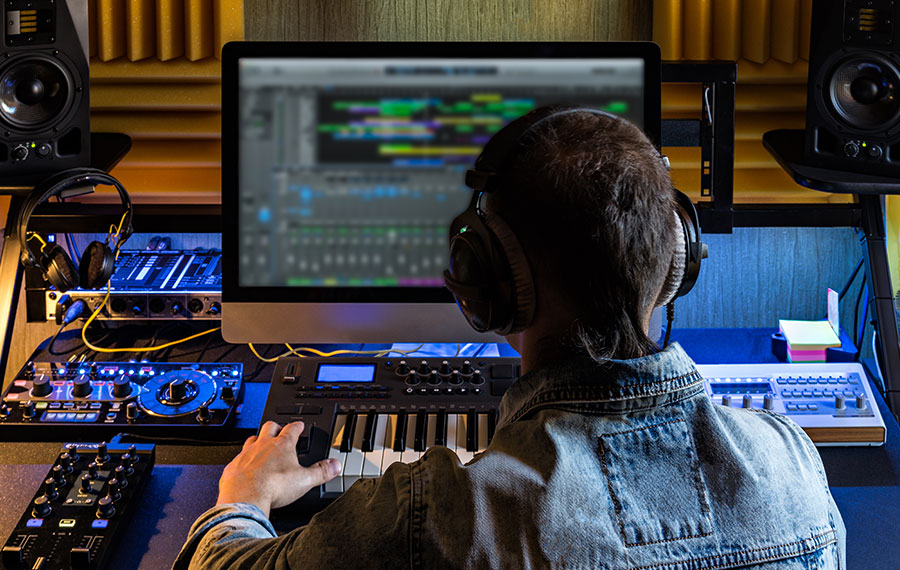 If you’ve ever wondered how important music is to a film, take a look at this scene from Star Wars:

And now watch it without John Williams’ score:

Yet it’s hard to imagine Star Wars at all without its memorable score – the uplifting and exciting main theme, the Imperial March (Darth Vader’s theme), the quirky cantina band. All part of what made the movie saga the global franchise it is today.

George Lucas once said that music and sound are at least 50% of the entertainment in a movie. Some even say it’s as much as 80%. Whatever the case, music is a huge part of the film-maker’s toolkit.

Music reinforces the images you’re seeing, helping to set the tone and mood, but most importantly, it’s fundamental to how you manipulate your audience into feeling the way you want them to. It has the ability to make us feel happy, scared, wistful, tense, relaxed… every emotion you can think of. We each associate music with memories and experiences, so if we want our audience to feel sad we can tell them to be in an instant, with just a short musical phrase or poignant lyric.

Perhaps the greatest piece of film music is another soundtrack from John Williams – the iconic Jaws. Can anyone who’s seen the film not think of a great white shark after just the first two notes? I doubt it. That’s the power music has.

When making a short film for our clients, we’ll place music at the forefront of our thinking. Perhaps we’ll create a playlist to help inspire ideas, or maybe we’ll base a treatment around a song lyric or a piece of classical music. Of course, we don’t have Hollywood budgets at our disposal and so are unlikely to commission Hans Zimmer or Ennio Morricone.

So what are the options? Whatever musical style you prefer, there are 3 types of film music you can employ:

Composed music is written to order. Sometimes we’ll start with an idea of what kind of music we have in mind, other times we’ll give the composer more of a free rein. Either way, they’ll work on a score that fits the edit perfectly, bringing the mood up when necessary, adding light and shade to the action and finishing on a suitable ending. A good composer knows what to leave out, when to be minimal and when to “go for it”. There are many great composers out there and choosing the right one is essential to a project’s success. The other benefit is that we’re working to an agreed price in advance, agreeing a fee to cover the composition and then further usage of the track.

Commercial music tracks are becoming more and more available for use within corporate film. The upside is familiarity – a hit record has that instant recognition with the audience, which can work as a shortcut to getting them involved in the story. The downside is that you need to make your film work to the track, not the other way round. Handily, more and more artists are providing the musical stems (the various isolated elements of the song on separate tracks) which allow us to edit the song to fit the length and structure of our film. We can remove the vocals, repeat the chorus and even lose specific instruments, making a commercial track much more versatile.

One thing to remember is that commercial tracks can work out to be expensive, especially when it comes to online usage. There’s no set rate – a massive hit by Ed Sheeran is likely to cost more than a track by an up-and-coming band. But we have great relationships with all the major labels and many smaller ones, which means we can see how affordable a song by David Bowie, David Guetta or even David Hasselhoff would be before we get too attached to it.

Music libraries have been around for decades, providing specifically-written tunes for TV and film. Surprisingly, some of the most recognisable TV themes are library tracks – Mastermind, Crimewatch, Countdown and, for those of us of a certain age, even Grange Hill (it’s a track called Chicken Man if you’re curious). These days, there are tens of thousands of songs available, in all possible styles. You pay a set licence, depending on your film’s usage and distribution, and away you go. It allows the film-maker to try different genres, tempos and instrumentation without costing anything at editing stage. So it’s a cheap way of employing a full orchestra, funk combo or grime artist. Again, the libraries often provide editable versions and various lengths for flexibility and many will employ their composers to adapt their song for you if needed.

So when commissioning a film, in the words of Simple Minds…

What should great learning feel like?
Getting Your Message Across